If you don’t remember the original Star Trek, you’ll probably not recognise the quote or think the green Dymo printer resembles a phaser gun. 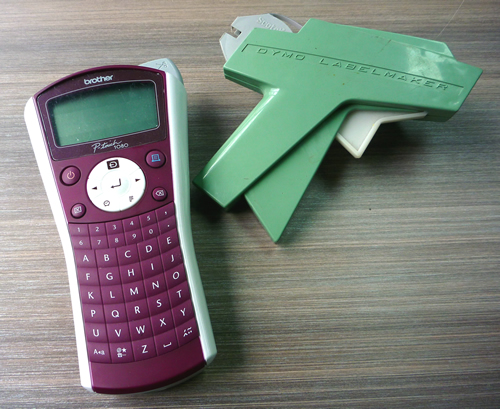 “Where no Dymo printer has gone before”

The idea for this post came from realising that the thing sitting on the next desk wasn’t a scientific calculator, but a modern digital version of the old analogue Dymo sticky label printer I’d been given as a Xmas present back in the day. It made me think how design can suggest function and operation, trigger (groan) an emotional response, and make the every day a little more interesting.

The Dymo has two triggers: one to impress the print head onto the tape (green), the other to cut the label from the roll (white). The visibility of the white tape cutter is better because of its contrasting colour and raised edge. Its affordance is also better, because it’s trigger shaped and located where you’d expect a trigger to be in relation to the handle. That said, whilst I know what to do with it, that it cuts the tape isn’t obvious. So whilst the design suggests interaction, its operation likely needs to be learnt.

That’s a reasonably complex process, but one I quickly learnt to do with the Dymo through trial and error. It’s not a complicated device and uses familiar controls: triggers are for squeezing, knobs and wheels for turning etc.

The digital version has only buttons to press (good affordance) so interacting with it’s controls is simpler; but it’s operation is much more complicated. Its form does not inform a mental model of what it does or how it works, and like a scientific calculator one has to carefully read and remember numerous function names.

Here fewer types of controls don’t make it easier to use. I also wonder how accessible the digital version might be to a user with: difficulty distinguishing visual detail, impaired fine motor control, or some cognitive deficit ?

I think most people would take longer to get a label out of the digital version, and find it less satisfying,
but with a “print again” function it would be my choice if I had 50 to make .
As Don Norman observes in his book Living With Complexity: “complex is different from complicated”.

A checklist for evaluating webforms

Different types of research
Scroll to top
We use cookies to ensure that we give you the best experience on our website. If you continue to use this site we will assume that you are happy with it.Ok